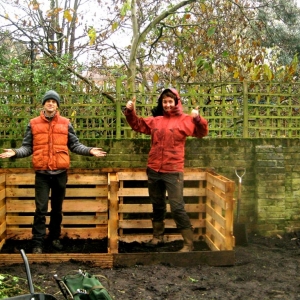 Sonia Cropper graduated from our apprenticeship scheme this autumn and has carried on volunteering with Paul ever since. She has now taken over one of our Patchwork Farm sites in Clapton Square and has grand plans for it, starting with some fine upcycling of pallets she garnered from various places. It's not really clear in the pictures but it was pretty grim and drizzly that morning - though they didn't let that put them off. Here's what Sonia wrote last week:

This morning Paul and I built two new compost bays at Clapton Square. The pallets we used were a mixture of pallets from the yard of the Old Fire Station, pallets from a local building site just down the road, and wooden planks that were hanging around the Springfield market garden. I used a bike trailer to transport some of this wood, which was an adventure!!

We built the bins under a tree where it is too shady to put in crops. Each bay should hold about a cubic metre of material - so a ton of finished compost!

I plan to be completely self-sufficient in compost on my site, using garden waste and other organic-certified food-waste from local organic food shops in the Clapton area. The plan is to spend the next month or so getting my site in order, building beds and sorting everything out so that's it's ready in plenty of time for spring planting when it'll become a fully functioning member of the Patchwork family. It's all been very inspiring and exciting!