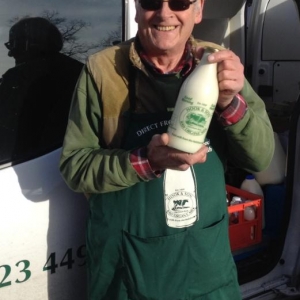 There has been a lot of talk lately about the shamefully low prices that supermarkets pay to dairy farmers - well below what it costs them to produce the milk. While supermarkets use milk as the chief weapon in their price wars, the losers are the farmers, who struggle to survive.In fact, there are now only about a third the number of UK dairy farms that there were 20 years ago. The total has fallen from over 35,000 in 1995 to less than 14,000 now (according to AHDB Dairy, quoted in the Guardian). This means small farms - and it is always the small ones - have been closing at a rate of about 20 every week. (This is made worse by the fact that small farms aren't eligible for the same EU subsidies as big ones.)

But it's small farms that have the highest welfare and environmental standards - especially organic farms, which ensure that cows spend most of their lives outdoors feeding on clover-rich pasture. When they're brought indoors in bad weather they have plenty of space and eat only organic feed. Cows aren't pushed to the extremes of production expected on large and conventional farms and calves are weaned later. Rules for organic farmers wanting to sell their milk unpasteurised become even more rigorous. They are not allowed to sell through supermarkets, wholesalers or other third parties, but can only sell direct to the public.So farmers like Phil and Steve Hook (above) of Hook & Son in Sussex, who sell raw milk, butter and cream at Growing Communities’ farmers' market in Stoke Newington every week, are completely dependent on markets like ours (as well as online sales). This means they take home more of the income from the bottle price than they would if they sold through a distributor, of course, but it makes the selling almost as labour-intensive as the farming.

A couple of years ago, film maker Andy Heathcote chose to document life on these fast-disappearing family farms and made The Moo Man about Steve Hook. The film was a surprise hit at the Sundance Film Festival, and Empire magazine called in "genial, poignant and compelling".We're offering a rare chance to see the award-winning documentary at our moo-vie night on Friday 11 September at St Paul's Church Hall in Stoke Newington, N16 7UY. We'll be mixing up delicious milkshakes and cocktails made with cream and milk from Steve's herd and there'll be a Q&A with Steve and his dad Phil afterwards.