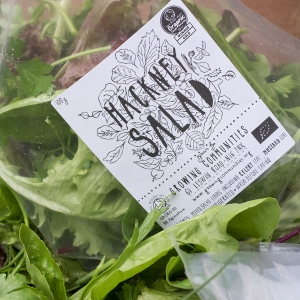 In this – the first week of ‘plastic-free July’ – we wanted to let you know how we are getting on with the whole packaging issue since writing this answer on our FAQs earlier in the year.  So here's an update from GC director Julie Brown.

Well… while it’s proving to be complicated and we’re not quite ready to draw any conclusions, we are making progress and even have moments of excitement about the changes we are planning!

So, we wanted to tell you a bit more about that, while also reassuring you that we are not resting on our laurels. We are actively seeking solutions that will help protect our planet – which is after all the primary purpose of Growing Communities – even if we are heavily disguised as retailers of fresh fruit and veg.

As you know, the main areas where we currently use plastics are the carrier bag for the veg scheme and the polythene bags we and our farmers use for salads and leafy greens.

A quick look at supermarkets

It’s interesting to compare our system with the supermarkets. Take the recent Morrisons paper bag announcement.

The produce they will now be using paper bags for is the kind of produce that we never put in a package in the first place. It’s obviously easier to notice the presence of something than the absence – but most of your fruit and veg is packed loose into the veg carrier bag and gets to you without any packaging. We’re able to do that without the veg spoiling because our supply chains are short, and we can get produce to you quickly. (Collecting it as soon as possible helps too - especially in this weather.) 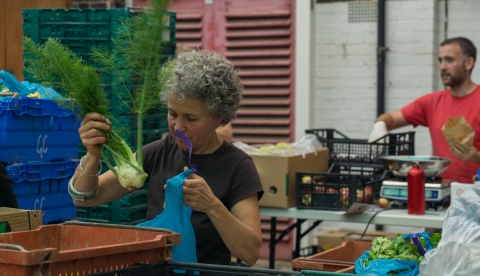 It’s all about perishability

Salads and leafy greens are the only kind of produce we currently have to use plastic for. We and our famers use the polythene bags to stop the salads and leafy greens dehydrating. All produce starts losing moisture as soon as it is harvested but leaves are particularly susceptible and without protection would be seriously wilted by the time you got them home – resulting in wasted food, wasted energy, unhappy customers and unhappy farmers.

Perishability is one of the elements we consider as part of our overall vision – see the Food Zones – so we prioritise producing and sourcing perishable produce from as close to where it will be eaten as possible. Generally, the more perishable produce is, the more energy (in the form of packaging, cold storage and energy intensive transport options) it takes to get that produce to you in an edible state. 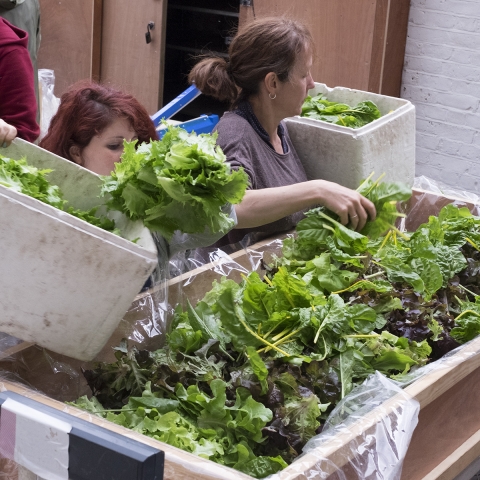 Perhaps the best example of minimal-energy-use greens is our Hackney Salad. It is grown right here and transported by bike to the packing area in reused polystyrene boxes that we have literally been using for years and years. BUT, if that salad were then packed into a paper bag it would be looking very unhappy by the time it arrived at your collection point. If you collected it 24 hours later – particularly in this weather – you’re likely to be greeted by a bag of mush. (In fact, environment expert Chris Goodall called the Morrisons move to use paper bags a backwards step for this and other reasons. The Guardian quoted him as saying: “One reason for the greater climate impact is that using paper will lessen the life expectancy of produce, leading to more food waste in landfill, where it generates methane, a powerful greenhouse gas.”)

Back to the carrier bag

As a collection scheme, we need to use a bag - not a box or other container. We found that out very quickly back in the early 1990s when we decided to switch from the original boxes to bags. Thankfully, the collection system has been shown to contribute very positively towards our overall carbon footprint: 96% of veg scheme members walk, cycle or take public transport to collect your veg.

Compare this with information from Riverford’s website: “Most studies show that the final step, to customers’ doors, is the most energy-consuming stage of food’s journey, because it’s when loads are smallest. We are no exception to this: at 26% of our total footprint, home deliveries are the single most carbon-costly element of our whole operation.”

So, our collection system is here to stay and it provides a solid place to start when considering our options.

The system we’ve used for the last decade or so is to ask you to return any of your old plastic bags, which we then reuse. Simple and environmentally effective. But over the years, we’ve begun to top up the returned bags with single-use blue vest bags as the volume of plastic bags in the system has reduced (a good thing) and return rates have not increased enough to keep the system flowing. And while the top-up bags we use are made from recycled plastic, it’s clear that we need to review the environmental benefits of this system. So, we’ve been researching, testing and comparing several options:

We’re not quite ready to draw our final conclusions but it’s looking likely that we will go for a fabric-based system – aiming to launch towards the end of the year. Such a system will cost a lot more and achieving the hoped-for environment benefit will require you to return bags at a higher and more consistent rate than has been demonstrated so far. So you can understand our nervousness about introducing such a system! But, we’re excited too – because it feels like the public appreciation of the need for behaviour change is at an all-time high and GC customers have always been ahead of the curve in terms of getting this stuff. So, watch this space….

More about the leafy greens

While we haven’t yet found an alternative to plastic for the greens, there are some exciting products coming onto the market that we and our farmers are actively testing. We’re setting up a trial of two new fully compostable films that have recently emerged (made of wood pulp/cellulose) and that might just be up to the job of keeping your greens fresh from farm to plate. We’ve already tested and been disappointed by PLA – the other compostable film made of corn or potato starch – as it simply does not do the job due to its permeability to moisture.

If one of these new films can do the job, then we are planning to collaborate with our farmers and the other Better Food Traders to see if we can design and commission a bespoke bag that will meet all our needs. And while this is an exciting prospect, it is also a very practical response to the fact that alone we cannot command enough ordering power to make it worth the manufacturers dealing with us.

Over the course of our research so far, I’ve been increasingly drawn to ideas expressed via the New Plastics Economy – which promotes reuse and recycling as much as possible before disposal. Such an approach would eventually reuse and recycle all the plastics that are currently in circulation, while simultaneously reducing the resources being lost from the system and then topping up any inevitable losses with plant-based virgin feedstock (click on image for larger version, and click here for a comparison with the current plastics economy). 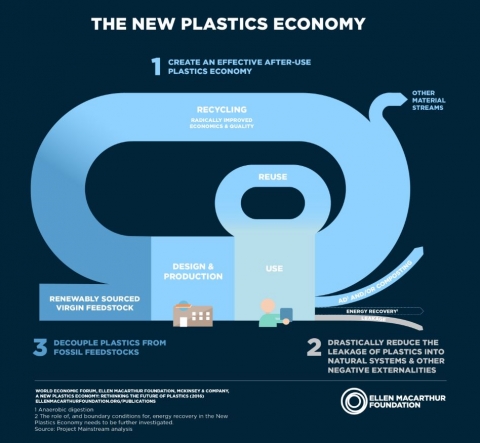 Such an approach will take effort, innovation, systems redesign and behaviour change on all our parts (business, statutory and individuals) – but in the longer run it seems to be the right approach, in which everyone has a part to play.

The main problem with this system is that it doesn’t exist yet! But as a vision it is a good one – and is something worth actively trying to work towards by supporting and helping to create market solutions while keeping in mind that some so-called solutions can create more problems if you don’t consider the whole system in the round (like bio-fuels and anaerobic digestion, when crops are grown expressly to be used as fuel not food).

As individuals we need to not just demand change from business and local authorities but also be prepared to be part of the circle by returning bags and other resources, so they can be reused or recycled – so recouping most of the resources used to make them in the first place.

And at GC we want to play our part in helping to stimulate and support the emergence of such an economy.

So, I’m cautious about the compostable bag option. It sounds like a neat and easy solution on the face of it, but a circular economy approach would always favour reuse where possible followed by recycling. Composting of plastics is effectively a disposal technique – and it will result in the embodied energy and resources in the original product being lost in one go.

Having said that, compostable bags could be useful for food bags and containers that are difficult to clean because if food waste gets into the recycling stream, it causes enormous problems. So being able to compost one-off food-covered bags in one go will make huge sense in some situations.

To be honest, I’m not sure that the bags we use for leaves are that situation and it might be much better to pursue a reuse and recycle option – even though it will be a harder thing to ‘sell’. It will require us to significantly adapt our current systems and it will require all of us to change our behaviour more.

Anyway – more research to do. We promise to keep you posted.

What to do right now

Well, continue to return your carrier bags to us and we will reuse them.

Reuse the polythene bags as often as you can before disposing of them in the main waste. Hackney don’t currently recycle them, so the only option right now is for them to go to landfill.

In the meantime, lobbying Hackney to include polythene bags in the mixed recycling would help. Better still lobby them to develop polythene-specific recycling arrangements.

We, meanwhile, will seek out an alternative option for getting polythene recycled. We’ve found a couple of companies that will recycle polythene but haven’t yet researched the practicalities. At the very least it is likely you’d need to return the bags to us and that will be a whole lot easier and make a whole lot more sense if we introduce that at the same time as the new carrier bags.

We have always worked to build practical alternatives that will work in this world but that will also be fit for the future we’re working to create. Getting from one to the other is a challenge but I hope you will bear with us while we work through this next stage.

We can’t be perfect and it’s not possible to solve this issue in a simple way – but we are rising to the challenge and are feeling really quite excited about the possibilities ahead. So, thank you for all your feedback and questions so far. Any thoughts, information or ideas, send them over and we’ll throw them into the pot.