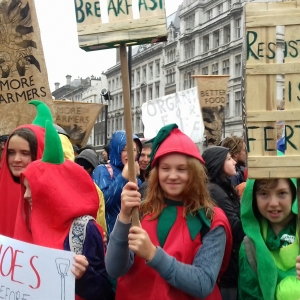 On a very wet Sunday morning a few hundred of us sustainable foodies, including a fair few Growing Communities staff, donned waterproofs, hats adorned with vegetable displays and witty banners and, accompanied by a big green tractor, marched joyfully banging pots and pans through central London, to demand better food for Britain. 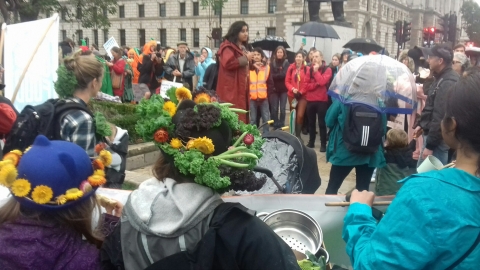 The timing was crucial – the latest IPCC report had just been published warning us we have just 12 years to avoid global warming going beyond 1.5 degrees (it turns out the 2 degrees we were previously talking about would be game over for life as we know it on planet earth), the UK prepares to leave the European Union and the Agriculture Bill is being finalised. We need more than ever to ensure farmers are able to produce nutritious, ecological, healthy food that everybody has guaranteed access to and that farmers are able to produce food in a way that doesn’t exacerbate the environmental crisis. The new Agriculture Bill will decide our future for generations to come.

The current dominant food system is owned by a small handful of very powerful corporations and is responsible for one third of all greenhouse gas emissions. Some 14.5% of all these food-related emissions come mostly from industrial livestock, which is also the force behind the destruction of the Amazon rainforests. We’re in the sixth major extinction on earth. Soil erosion and biodiversity loss are at an all-time high – British wildlife populations in the countryside are plummeting because of the use of chemicals in agriculture.

We need to radically and boldly change every polluting industry in the world, especially food. Where to start?

It often feels like the odds are stacked against us, and we wonder what’s the point in demonstrating. The chemical/agribusiness lobby is too powerful. Will the powers that be really pay any attention?

Regardless of whether there’s hope for change, we marched because the act of standing up for what you believe in is vital. It empowers us and brings us together. But the experience of marching was also for solidarity with our farmers, who bear the brunt of unfair farming policy and consumer apathy. They were heartened that so many people had turned out to march despite the terrible weather. 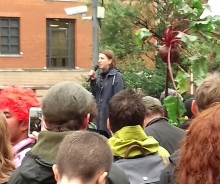 But there are also many reasons to be hopeful. The keynote speaker at the march, American food activist Anna Lappé (above), said: “Cynicism is a weapon that they use against us.” This is so true – if we feel like we are up against something that can’t be changed then we lose hope and don’t try. If we look back into history, some of the hugest civil rights triumphs were won against the odds. The abolition of slavery was supposed to tank the economy; giving women the vote was going to destroy the family institution. But they overcame in the end because what they were fighting for was fundamentally right. In this fight for good food and, in fact, our very survival on earth, we have many things on our side.

So here are four facts I learned on Sunday that are reasons to be hopeful:

1) There is a myth that industrial agriculture is the only viable option for feeding the world.

Some 70% of the world’s food is still produced by smallholder farmers. The We Feed the World exhibition by the Gaia Foundation so beautifully illustrates this in their extensive photographic documentation of 50 farming communities around the world who are resisting industrial methods, keeping it small and beautifully in balance with nature. 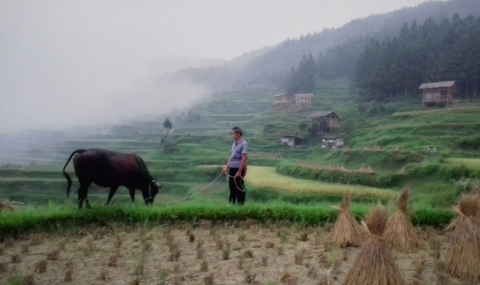 2) We have nature on our side.  Ecological farming is proving as productive (if not more in some cases) as conventional farming and resilient to the effects of climate change. It’s becoming increasingly clear that we don’t need the chemicals and the GM seeds. Agroecology works, and more and more conventional farmers are turning to organic because their crops are failing and they’re crippled by debt from years of paying out for expensive seeds and their required chemical companions.

3) We have science on our side. There's mounting evidence that chemical-dependent agriculture is dangerous to our health and the environment. A landmark civil case against Monsanto in the US recently proved Glyphosate (a herbicide used in non-organic farming - and by Hackney council in parks and on the streets) is carcinogenic. As well as not causing further damage to the environemnt, agroecology will play an essential part in taking carbon out of the atmosphere – organic farming methods sequester carbon into the soil, and this is a key strategy for how we prevent more than 1.5 degree warming.

4) The consumer tide is turning. The top 25 American food and beverage companies have lost $18 billion in market share from 2009 – 2015. They are becoming less relevant. The organic market is growing every year. In the US there are now more farmers' markets than Walmarts.

Four things you can do to help:

Ask the government for:

3) Join us at the next Good Food March. Today was our first march in the UK but thousands of people turn out across Europe every year. The UK has one of the most disconnected food cultures in Europe and we want that to change.

4) Keep buying organic and local as much as possible and encourage your friends to do the same. I know it’s easier in Hackney to source well but for friends and family in other boroughs, check out the Better Food Traders to find their local veg scheme.