≡
Where are we going?
Wednesday, 9th December 2015 by Julie Brown 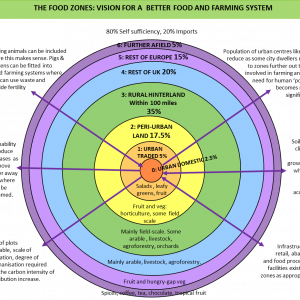 Travels in the Food Zones: Where are we going?

So, plenty to explore.

But it occurred to me that what we don’t really have yet is a vision in story form. Something that describes in words what the future might be like if  we traveled in the direction the Food Zones is heading.

So I thought I’d have a go at doing that now.  It’s more short story than novel and while it may lack plot and narrative drive I hope it will hold your attention for a while.  And I’d love it if you could tell me what you would add or change.  Here we go…..

A network of farms in and around urban areas provides at least 60% of the food needs of those towns and cities. 20% comes from other parts of the UK and a further 20% comes from Europe and further afield.

Our society is made up of at least 20% who are involved in farming in and around the areas in which they live and most people have a portfolio of work which includes some food-related work – paid and unpaid – that enables them to live.

Farming continues to be about raising food for a living but this increasingly includes different approaches such as part-time patchwork urban farming and city people involved in running orchards and farms which supply food to their communities.

All farmers and producers, wherever they are, are paid a fair price for their food.

Many people are also involved in growing some of their own food but more significantly they are connected to the people and the farms (be they urban or rural) that produce the majority of the food they eat. They regularly volunteer at their local urban market gardens or they contribute some or all of their garden towards a Patchwork Farm or they have an allotment on which they grow a proportion of their own food.

They understand where the rest of their food comes from and how and by whom it is produced. They value and respect those people – after all they know what skill it takes to grow food all year round, particularly as the weather is still so unpredictable.

They buy their fresh food from community-led box schemes, markets, community shops, CSA schemes and online schemes and they know how to cook and enjoy that food. Fish schemes like Soleshare abound, as do artisan bakeries like E5 Bakehouse and Better Health alongside local distillers and brewers.

Supermarkets still exist but they control a much smaller share of the food market and specialise in consumables and processed foods, leaving most of the fresh food to those traders better able to distribute that produce in a way that meets the needs of the farmers. The food they sell continues to come from the remaining larger more industrialised farms for whom this method of distribution still makes some sense, and they are able to provide some of the more basic products – such as bread, butter and cheese.

Many of the supermarkets have returned to being what they were originally – i.e. a one-stop shop under one roof – but where the produce is sourced along the same lines as the community-led systems.

Organic certification is no longer necessary as all food production is pretty much organic (although emergency use of certain pesticides and temporary use of artificial fertiliser is practised, but this is the exception rather than the rule).

Farmers sell through a combination of routes.  Supply chain cooperation – through regional networks of traders – means their journeys are minimised and loads are optimised. The network of Better Food Traders grew out of the Growing Communities start-up programme back in 2016 and many thousands of other box schemes, markets, shops and online retailers like Food Assembly have since joined the network.  Supply chain cooperation – using  a very nifty bit of tech developed in 2019 – ensures the distribution systems work as well as possible. Regional depots or hubs provide central drop-off points for producers along with other services.

Farmers also cooperate with each other a lot more too – sharing knowledge as well as larger bits of equipment and processing facilities. The Land Workers Alliance has grown and now represents and campaigns on behalf of thousands of farmers and growers.

Urban areas have reduced their populations somewhat as people have moved to the surrounding countryside to produce food. That in turn has resulted in a re-invigoration of rural towns and villages, while also freeing up more urban land on which to grow more food, so that urban areas themselves are able to make a more significant contribution to providing food for their own populations. The reduced need for car parks and roads has freed up even more land for urban food production….

People eat out a lot – communal one-pot type affairs as it makes sense to pool resources and it’s nice to eat with your community. Not all the time though! Sometimes people splash out on more bespoke places where they can get away from their neighbours!

There are far fewer takeaways and convenience foods around – it’s just too energy intensive – and also people are happier to eat at home as they know how to cook and often are less rushed for time as working patterns have shifted.

People eat a lot less meat. Any protein gap is filled by beans and pulses – from traders like Hodmedod’s – and from urban aquaponic and insect-based systems. Urban chickens and goats abound – although to be honest these are used mainly for their eggs and milk and rarely end up in the pot until they are getting on a bit.

Everyone knows what is their fair allocation of food according to calories, optimum nutrition and environmental impact. A clever app and coding system enables everyone to shop as they please while still easily keeping a tally on their budget. People can trade on any spare allocation or save up for a blow-out on a luxury item. A similar system for transport was introduced back in 2025 so that if you cycle, walk or take public transport for most of the time, you can save up for say a flight at a later date. You can also trade across sectors, which means that in practice vegans generally get to be taking many of the flights available!

In terms of the Growing Communities veg scheme – an app is able to check produce before it is delivered for packing so nothing is ever sent back or requires extra sorting time.  And nifty sensors in the packing area count the bag numbers and ensure numbers on the delivery vehicles and at the collection points tally with the packing lists.

And what about me? Well I’m a sprightly 72 year old. I finally learned how to grow pears (easier now that people are more accepting of the need to grow food with the minimum of chemicals) and in my spare time I’ve taken to making knitted vegetables and teeny-tiny origami animals.

OK – so that’s it for now. I also have another scenario that sees me being eaten by my children in the ‘great reckoning of 2030’ but that’s for another post..…

But what about you? What would you add or change?