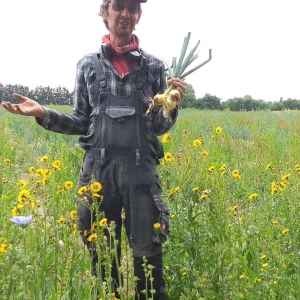 On a sunny Sunday a group of GC staff and family went down to Ripple Farm in Canterbury, Kent to explore the farm that has been supplying the veg scheme and farmers’ market for over 15 years

Martin and his wife, Sarah, showed us around their 120-acre farm that’s spread out over three sites. On arrival they distributed yellow buckets and led us deep into the potato field to harvest red Rudolf potatoes – they come out of the ground a shocking pink colour. 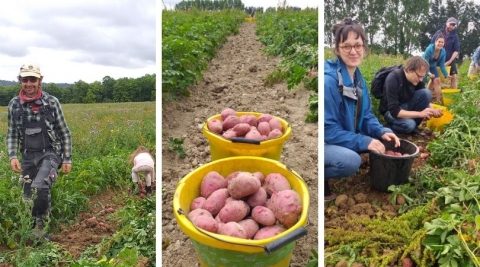 Their farm is an oasis – bees buzzing everywhere and birds singing overhead. Just as you’d expect at a farm, right? Well this is actually out of the ordinary. Most farming in the UK is large-scale industrial farming of mostly arable plants that are grown across huge pieces of land (e.g. large monoculture crops of barley, wheat, rapeseed and the like). Fruit and veg growing (horticulture) takes up less than 1.5% of UK farmland. And just 2.7% of the total farmed area in the UK is farmed organically.

On these large, non-organic, arable farms, hedgerows, essential habitat for wildlife, are removed to make larger fields easier for machinery to manoeuvre. On top of that, these large systems rely on chemical inputs – pesticides, herbicides and fertilisers which kill off insects, poison birds and degrade soil – essentially destroying the natural systems that underpin our ability to produce food. Due to this industrial form of agriculture, globally we are facing a risk of insect populations going extinct. Currently it’s estimated that 40% of insect species are endangered. Research shows that on average, bird, bee and plant life is 50% more abundant on organic farms, with 30% more species. This is certainly the case at Ripple Farm. 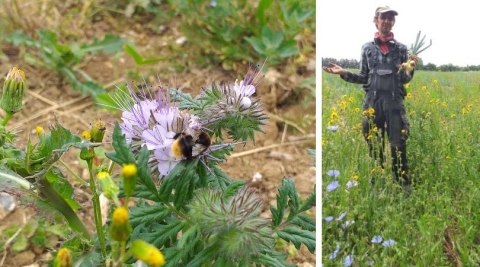 During our race to fill buckets up with potatoes, Martin and I pause briefly to listen to a skylark singing above our heads. Martin points out that skylarks are in decline, like most farmland birds these days, but on his farm they are flourishing.

Ripple Farm had a visit from the RSPB turtle dove officer recently. She said: “The farm is absolutely amazing and the amount of fumitory and other arable wildflowers lifted my soul! I have never seen a farm like it – I was blown away and totally understand why you have turtle doves on site!”

The way Martin and Sarah achieve this is very simple: after a cropping season, the field is sown with 'green manure' – mixes containing clover, grasses and other beneficial plants - also known as “herbal leys” that add nutrients and organic matter to the soil as well as providing food for pollinators. These are then either grazed by sheep (via an arrangement with a local farm) or mowed before they set seed. When they’re ready to use the field again, the leys are ploughed back into the soil, where all the nitrogen from the plants is “fixed” into the soil, boosting the fertility. In addition, that two-year fertility-building period allows for carbon to be sequestered into the soil – the plants take carbon dioxide out of the atmosphere and store it underground.

How can a farmer afford to leave fields un-cropped for two years? For organic growers its part and parcel of caring for and feeding the soil. But for many farmers, margins are so tight, particularly If they’re selling to supermarkets, they may not even get paid the price of production for their crop so they have to use every bit of land they have to keep their heads above water. This underpayment of farmers is at the heart of unsustainable farming practices. The financial pressure on farmers has made upscaling a necessity for many. As a result the number and size of large farms is steadily increasing while small farms are closing at an alarming rate. 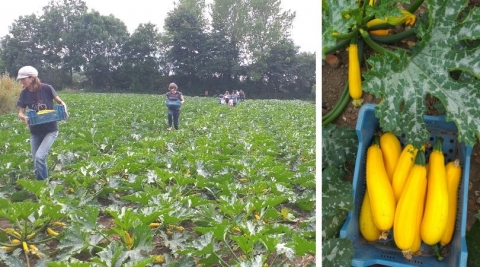 Ripple used to sell to supermarkets but found their unfair trading practices were going to be the end of the farm if they didn’t do something different. After lunch we went to the courgette field to harvest yellow courgettes. While we were picking and packing Martin told us of his experience selling to a wholesaler that supplied a major supermarket (with very green credentials). “We agreed to grow 1 acre of courgettes for them. When it was time to sell them, we harvested the lot and sent them to the wholesaler” (who then sent them on to the supermarket). The supermarket rejected them on arrival, blaming cosmetic reasons. To add insult to injury, they made Martin pay for the cost of disposing of them. With such short notice, it was impossible to find another buyer for such a large volume of highly perishable food. Sadly the courgettes went to waste. This is pretty common complaint among farmers and is why trading fairly is one of GC’s key principles.

Martin realised the farm couldn’t afford that sort of loss again. He researched alternative routes to market and started selling direct to customers by setting up a box scheme. Since then his farm has flourished – by selling through select farmers’ markets and small-scale box schemes, such as GC and the other Better Food Traders. Cutting out the middlemen has enabled him to generate the income he needs to be able to afford to farm sustainably, including keeping those fields fallow, which is the absolute bedrock of sustainable farming. 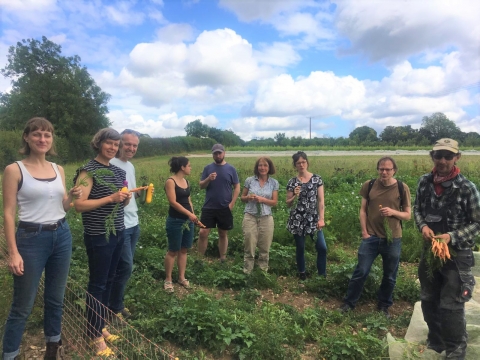 Martin and Sarah's farm is a true testament to their love of the land and their passion for living in harmony with nature. Their conscientious and knowledgeable approach is evident in everything they do. An afternoon with Martin feels like an education. We learned so much about the way they farm, their consideration of the fossil fuels they’re using to plough fields, the way they treat their workers, their reuse and reducing of packing materials. We feel truly blessed that this kind of farm exists, and we hope they will become an inspiration for other farmers who want to help solve the climate crisis and come back to organic.