≡
A year of hope and action
Thursday, 7th November 2019 by Rachel 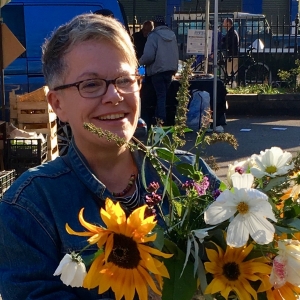 Our founding director, Julie Brown, reflects on another year of practical action in the sustainable food sector against the backdrop of a very eventful year for climate activism. This was published as the foreword for our Annual Report

I’ve been pondering when we all got drawn into believing that we could change the world through ‘green consumerism’. The concept first raised its head back in the 1980s when I worked at Friends of the Earth. We were wary of it then because – at the risk of sounding like an Einstein misquote – you can’t solve a problem using the same approach that caused the problem in the first place. Moreover, you run the risk of shifting responsibility away from governments and corporations.

And then when did green consumerism mutate into something that left all the responsibility (and the guilt) for saving the word resting squarely on individuals and how they spend their money? (Hmm, I wonder if there’s a link there. Sadly I only have 800 words so my rant about neo-liberal economics and the power of corporations will have to wait….)

“Pitting zero-wasters, anti-plastickers, flight-shamers and vegans against each other is as likely to divide and conquer as it is to achieve effective positive change.”

Don’t get me wrong: the fate of this phenomenal planet does ultimately come down to how much stuff each of us consumes. But it seems that most of our impact is embedded in the systems that provide the basis of our society – the infrastructure, processes and worldviews that dictate how our energy, transport, agriculture, industry, housing, education and healthcare work. These aren’t things we can directly control through our personal consumer choices. (And pitting zero-wasters, anti-plastickers, flight-shamers and vegans against each other is as likely to divide and conquer as it is to achieve effective positive change.)

That’s one of the reasons I’ve welcomed the emergence of Extinction Rebellion as it recognises that we are all embedded in the ‘system’ (we are all hypocrites!) and that we need to start directing more of our energies towards government to create the conditions to change that system, through policy, regulation, taxation, standards, incentives, investment – whatever it takes.

That whole individual versus systemic is a tricky thing to define never mind quantify (if anyone out there has some good stats I’d love to hear from you) but the difference can perhaps be illustrated in the following reports:

According to Lund University the most effective individual changes are:

While Project Drawdown ranks the impact of systemic interventions (of which two of the most significant – fascinatingly – are educating girls and providing access to affordable contraception):

•  Top of the list comes (surprisingly, but a bit uninspiringly if I’m honest) refrigeration – specifically replacing the HFCs that replaced the ozone-depleting CFCs in the 1990s but turned out to have a much higher greenhouse impact
• On-shore wind power (getting more interesting)
• Reducing food waste (now you’re talking)
• Moving to plant-rich diets (yay!)

“We recognised back in the early 1990s that we needed radical change in our food system. But we had no confidence that government would legislate for that change or that the food and agriculture industry would voluntarily reform and regulate itself. So, we set about creating a viable alternative”

Interestingly, GC operates in the space between the individual and the systemic. We recognised back in the early 1990s that we needed radical change in our food system. But we had no confidence that government would legislate for that change or that the food and agriculture industry would voluntarily reform and regulate itself. So, we set about creating a viable alternative to that system (albeit on a very small scale) that could aggregate and focus individual choices towards the systemic changes we were seeking.

Over the past 20 years, using the collective buying power of our community, we’ve been able to shape the food and farming systems that feed us: providing organic and agroecological farmers with fair and sustainable routes to market; creating new and ethically based supply chains; championing an alternative approach that designs out waste and pollution and designs in environmental protection and community-building, while supporting plant-rich diets right from the start.

“It’s clear we don’t have much time left to avert catastrophic climate breakdown, so we are increasingly doing what we can to lobby and campaign for the changes needed.”

In an ideal world, this alternative system would grow and eventually replace the old, obsolete system. But it’s clear we don’t have much time left to avert catastrophic climate breakdown, so we are increasingly doing what we can to lobby and campaign for the changes needed.

This year we’ve worked on the Agriculture Bill, the Environmental Land Management Scheme designed to replace the European Common Agricultural Policy, the National Food Strategy and we have developed a joint Horticulture Campaign with the Landworkers’ Alliance. We’ve been active in the Fruit and Veg Alliance and on the Defra-based Horticulture Roundtable. Recently we started a project with the New Economics Foundation and the Soil Association to measure and monetise the impact of GC’s supply chain in terms of its social, financial and environmental benefits – the triple bottom line.

Fortunately, XR, Greta and the Youth Climate Movement are shifting the tone of the conversations possible and – I very much hope – helping create a policy environment more receptive to change.

And importantly we can base our work on a 20-year track record of practical action and plenty of evidence of our impact. And that’s down to the continued support of our veg scheme members and farmers’ market customers.

As we all continue to take action in support of this incredible planet, we’ve written and continually update our vision for a better food system that would enable us to live and eat well while averting the ecological catastrophe of climate change.  In our imagined future outdated supermarkets own a much smaller share of the market and are largely replaced by a plethora of community supported agriculture schemes, bulk buying groups and packaging free shops. Economic and cultural shifts towards shorter working week, the circular and gift economy means people have more time to cook and get involved in urban food growing and orchards, so that everyone is much more involved in their food system.

Thanks to Imogen Foxell for bringing our vision to life with her wonderful illustrations. You’ll recognise some elements as they’re already in place: a testament to action already taken.

Hope springs from action. And action can be a powerful antidote to despair and fear. Thank you for continuing to act.