The annual Oxford Real Farming Conference is a thrilling opportunity to listen, talk and share ideas with other people who think deeply and care passionately about building a better food future.

Several GC and Better Food Traders people went to the conference earlier this month and came back fizzing with ideas, inspiration and new knowledge – on insects’ weather-forecasting skills; the myriad benefits of woodchip; the power (and dangers) of storytelling; the pros and cons of meat versus plant-based diets; and the best ways to increase diversity – not just among crop, wildlife and insect populations but among farmers themselves.

As a first-time visitor to the ORFC, Better Food Traders project leader Natasha (below, right) said it was exciting to see what we’re doing in context of the bigger picture and to hear the BFT network being talked about – by people other than her – as a critical part of the sustainable food future we need.

During the session “ARMs for Farms! How retailers can increase the demand for sustainably grown fruit and veg”, Natasha formally launched the BFT network and announced the first schemes to achieve BFT accreditation. Yes, GC is one of them! 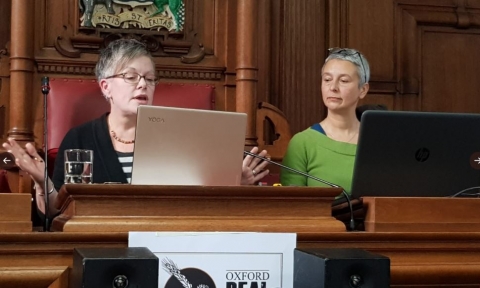 GC director Julie (above, left), who chaired the session, said retailers are in a unique position to positively influence both the supply of and the demand for agroecologically produced fruit and vegetables.

All about the margins

Julie explained how she had been intrigued by the way Professor Lisa Jack from the University of Portsmouth talks about how we can redesign food supply chains. Professor Jack says we must examine an industry maintained by, on the one side, very narrow margins for profit and error; on the other, very wide margins for waste, shelf-life and choice.

Julie added: “When it comes to major retailers, those narrow margins and the drive for shareholder profits exert pressure to reduce the amount paid to suppliers. Labour is one of the major supplier costs – particularly for horticulture and even more so for agroecological horticulture – so this pressure to cut costs results in this type of supplier finding it increasingly difficult to survive in the mainstream/supermarket system.

“And on the other hand – those wide margins for waste, shelf life and choice mean that produce is made available all year round regardless of season or how far it has to travel. For perishable fresh fruit and veg, which needs refrigeration, packaging and protection during its long journey, the resultant system is inherently high carbon and wasteful.

The ARMs model takes pretty much the opposite approach to both sides of the equation:

Julie also chaired a related session with the Landworkers’ Alliance and Food Foundation about how UK growers could meet demand for fruit and vegetables (there's a recording of the session here). Key factors are having more GC/BFT-style retailers to ensure a bigger proportion of retail spend goes to the farmers and producers; training new growers and improving access to land.

How best to tell our stories

Another conference highlight for Natasha was a session on storytelling and how best to bring what we do to life in a way that engages people but without oversimplifying, misleading or polarising. After all, one anecdote is not data. But Guy Singh-Watson said Riverford has done lots of research and has plenty of statistics around food and sustainable farming, but they don’t make the difference. “Stats are not why people buy things; emotions are,” he said.

Josiah Meldrum of British pulse producers Hodmedod's said stories help to teach and transmit culture, but many stories we are fed are binary and superficial. Baked beans are not the only pulse! We need new stories with which to nourish ourselves.

Meanwhile, our Dagenham grower Alice attended some sessions about growing:

“Two sessions particularly inspired me with ideas I will take back to Dagenham Farm. Firstly, on the wonders of woodchip. Woodchip could be of particular use to urban farmers as it is often a waste product for urban councils and contractors. I knew of its benefits to soil life when composted but found out more: woodchip contains high levels of lignum which greatly enhances soil structure. This in turn aids soil in retaining moisture, lessening water use. Other uses were using it as seed compost, using it to heat propagation, using it to cover green manures and farmers planting directly through it to minimise weeds. We can get it for free in Dagenham so this is all very exciting to me.

What we can learn from car production...

“The session from Ben Hartman from The Lean Farm, Indiana, was also very inspirational," added Alice. (Listen to it here.) "At their farm they have been cutting back on farm area, at the same time as increasing productivity. Their farming practices mimic some elements of the Honda car production plant in Japan, with a focus on trying to minimise waste. At first it sounded strange to be using comparisons with a car factory. However, central to the idea was focusing on creating a happy working environment, which in turn aids productivity. The farmer described waste as activities that prevent farm flow and do not directly produce value. I have been working on streamlining Dagenham farm and it was useful to have fresh examples of how others are approaching this. Also strange to find another farm with links to a car factory!”

Zosia is both a GC senior manager and a grower herself. She was hugely captivated by a session on insects by Will Hawkes from the University of Exeter (listen here) in which she learned that hoverflies are both voracious eaters of aphids and incredibly useful pollinators, maintaining genetic diversity by visiting a wide range of plants. Insects also migrate long distances, as far as sub-Saharan Africa in some cases, and they prefer to travel during good weather. Even that ridiculously clumsy looking creature, the bumblebee, can cross the North Sea! What’s more, added Zosia, insects contain high levels of nitrogen and phosphate, so nourish the soil when they die. 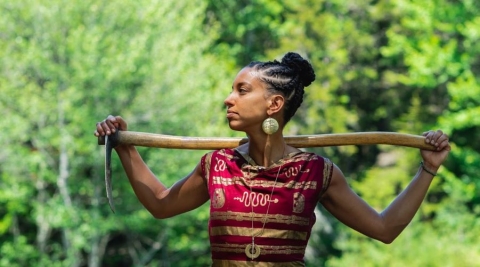 Zosia also enjoyed the excellent talks from Leah Penniman of Soul Fire Farm (above) and Maggie Cheney of Rock Steady Farm & Flowers in the US (listen here). They talked about how to produce good, sustainable food while addressing social inequalities, food access for low-income groups, access to land and capital, and farm worker rights and embedding social justice into their farming practice. One fascinating idea is having a sliding scale for veg scheme payments, alongside guidance to assess where you fit along that scale.

Alice was also mulling over the idea of access – not just to land and good food but to the wealth of knowledge and energy at the conference itself. “Over the past four years, I’ve only been able to attend a couple of days due to various issues around having children (including one year when I was in labour!) It has made me appreciate being there all the more and think about those who can't be there.”

Finally, one of the most well-attended and controversial of this year’s Oxford sessions was what Alice described as a “fiery debate” on diet, nutrition, land use and food production (here's the recording).

Activist George Monbiot believes that to solve the climate crisis we should rewild the land currently used for livestock farming (and growing food for those animals) and instead grow our protein in lab-like factories. This raised concerns from many in the hall, said Alice: “From the danger of corporations controlling the food we eat, to lab-grown food being a health risk.”

Journalist Joanna Blythman described what she felt to be a problematic trend towards eating purely plant-based diets, discussing the benefits of a diet including grass-fed meat.

Alice said: “I came away thinking how important it is to always bear in mind context and using land in a way that’s appropriate to where you live. Both animals and plants could be problematic depending on how and where they’re produced. Eating a diet that is local, mainly plant-based, sustainably produced and organic still seems to make most sense in terms of our health and the planet.”

Meanwhile, Natasha came away thinking about compromise, consensus and culture change: “As Patrick Holden of the Sustainable Food Trust said at the session 'We all want the same thing'."

She added: "If we want a good future for our food system, we have to put our egos aside and all do things we don’t want to do: step aside, rethink, admit we make mistakes.

”Change isn’t just about what’s the right thing to do; it’s also about human behaviour. It’s about changing culture. That's the challenge.”

Many of the conference sessions were recorded so you can catch up on what you missed here and watch a short video of highlights from the event.