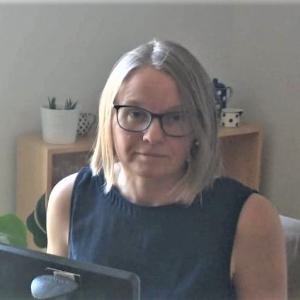 Jo Barber is the veg scheme coordinator. It's her job to make sure all aspects of the scheme run smoothly each week, 51 weeks of the year.

She shares her behind-the-scenes view of what Covid-19 has meant for her and the veg scheme, and how hard the whole organisation has worked to keep it going.

Not being able to physically be there has been the toughest thing for me. Because I'm type 1 diabetic, I've been shielding. It's hard knowing others are going in to work, putting themselves at risk when you're not.

Right at the start, it was very frightening for me and so many other people. There were too many unknowns and worries: what if one of my parents gets ill? how are we going to shop and collect prescriptions? What will happen to supplies of produce for the veg scheme?

My husband, Kevin, and I had a week booked off work when it all started. On Monday we were in a hotel in York for a night when calls and texts started coming in. By Wednesday I was back in London, collecting my laptop from the office and starting work.

The first two Wednesdays, our main veg pack and delivery day, were very intense. You never felt in control because things were changing instantly – the van hire company closed down, collection points were shutting and staff absences meant finding cover at the last minute.

Every change had a knock-on effect. A closed collection point meant members had to be notified and moved to another one straight away. Then the delivery round would have to be changed as the scheduled times were impacted.

To start with, emails, calls and texts were coming through so quickly you couldn't keep track of the most urgent thing to do. It was fast paced and required constant decision-making. Everyone was working on adrenaline.

There was also a new member of staff to train and induct. Dom, who was on the delivery team, joined the veg scheme coordination team just as lockdown happened. The timing was brilliant as he was able to be physically there, working with and learning from Ellie and Nicole on pack and delivery days. But it was a challenge for me to train and manage a new member of staff remotely. The two of us are in constant contact by phone and text on pack days. 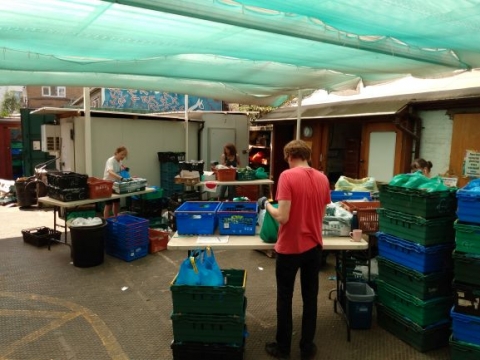 I felt a real sense of responsibility for the safety of our staff but also for providing a vital service. Initially everyone was worried about accessing food; people were depending on their weekly produce more than ever.

GC had to totally change the way we worked to enable social distancing – something as simple as unloading a van had to be changed because you can't have two people working closely together.

We also had to redesign how we laid out the veg pack to spread the staff out. We're now using the Old Fire Station main hall as well as the yard for the pack. It takes longer to wheel produce back and forth, plus we now have two sets of staff to communicate with. 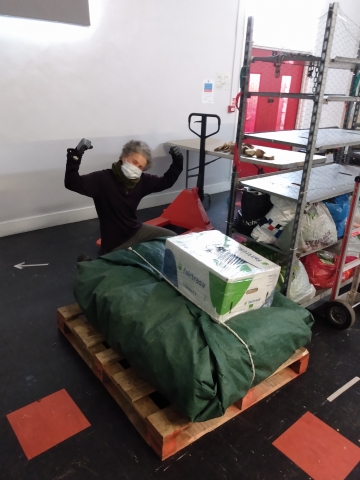 We’d started talking about a price rise last autumn because the price of produce meant it was becoming impossible to fill the bags the way we used to. After Covid-19, prices were increasing and fluctuating far more – prices would rise even after I'd placed the orders, which totally blew my budgets.

Covid-19 very inconveniently coincided with the hungry gap, so produce became more limited and unpredictable. Every year the hungry gap is different and every grower has different challenges. Some years onions and potatoes run out early, but this year they've been available throughout. But carrots ran out quickly due to panic buying and leafy greens were late.

We were more reliant on European producers than usual. I thought, “how on earth are Italian farmers going to supply us, because their country is so badly affected?” Amazingly, our Italian suppliers have been able to provide a reduced but consistent supply and helped us fill those gaps.

As I'm unable to collect my GC bag at the minute, I’ve switched our veg bag subscription to OrganicLea in Walthamstow, as they are closer to home. We share the same suppliers through the Better Food Shed, so we often order the same produce. It’s useful to see what they're buying each week and how a GC bag might compare. And to be able to touch and smell the produce when I can’t be there in our packing yard. Photos just aren’t the same!

What has helped keep me going is the sense of being useful and being grateful Kevin and I are both in work. An added bonus is the supportive messages from veg scheme members and market customers. The feedback means a lot to us all. People have shared their appreciation for GC generally and how much they admire it for still doing such a great job in uncertain times. Plus how proud they are that this is happening in Stoke Newington and they feel part of something worthwhile and potentially socially influential in future.

I already knew how hard working and dedicated my colleagues are but it's reassuring to know the team is robust and adaptable and can work without you.

I’ve had no time to learn a new language or take up crocheting, but I have been for a walk most days and enjoyed spring blossoms like never before. Throughout all this, I’m grateful that we have good food on our table and I’m conscious that that isn’t true for everyone. 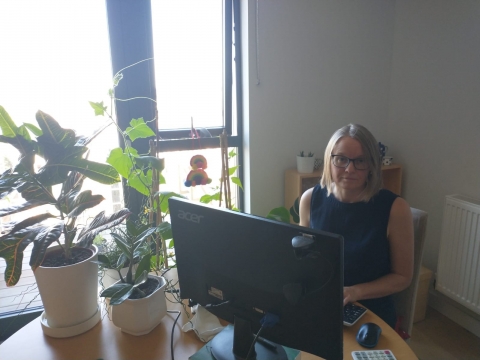