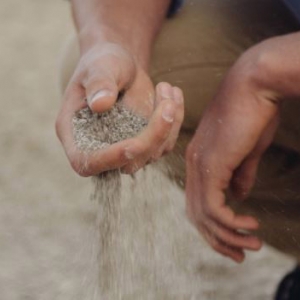 This blog post was written by Marlon Opigo, our EcoTalent* intern, who is working with us for four months, mainly at Dagenham Farm but also with the GC office team and the Better Food Traders.

Soil plays a big role in our lives every day. It’s vital for the farming industry and the systems needed to produce the food that we eat. It provides the means for plants to grow, which creates the oxygen that we breathe and the clean water we drink. But the current food system negatively impacts the environment: pesticides often used by industrial farming damage the soil, which leads to climate change and loss of biodiversity.

Peter Segger, an award-winning farmer who produces organic vegetables and salads, describes soil as our “life-support system”. In this article, I will explore the importance of soil and why we need better soil quality to create a more sustainable future for the coming generations.

Soil creates resilience to climate change by storing carbon and locking in greenhouse gases that would otherwise be released into the atmosphere. Approximately 50% of the excess carbon dioxide in the atmosphere has resulted from the oxidation of carbon from our soils. This suggests that current farming practices are damaging the soil and reducing the ability for the carbon to be stored. In addition, soil quality promotes biodiversity. The wellbeing of plants, land-based animals and humans depends on the complex process that takes place in our soil.

The quality of soil depends on the presence of living organisms to remain fertile. Over 15 tonnes of bacteria and microbes can be found in soils. These organisms create biodiversity when raw materials and waste are broken down (organic matter) to produce humus, which Indian environmental activist Vandana Shiva describes as the “new green revolution base”.

This work of soil organisms enables the release and store of carbon, helping regulate the flux of greenhouse gases and the ecosystem. The more organic matter there is in the soil, the better carbon sink it can be. As a result, better soil quality has a direct impact on human health, crop productivity, water resources and food security.

Furthermore, without good soils we will have water problems and be more at risk of floods. Bioremediation is a natural process that uses the soil to store and purify water as it infiltrates the ground. Earthworms can enhance the process of bioremediation, as they regulate the activity and distribution of microbes in the soil. Hence, a soil rich in biodiversity is essential to obtain better results from bioremediation.

We need to do better at preserving our soil through organic farming as the current farming practices create soil erosion, desertification and deforestation. To help reverse the effects on climate change the best option is to protect soil biodiversity.

Kiss the Ground: a review

This Netflix documentary exemplifies the point that the only way to try and reverse the impacts of climate change is to rejuvenate the Earth’s soil. By doing so we can balance the climate through biodiversity, purify the water supply and better feed the world.

In the beginning, the narrator, Woody Harrelson, conveys a dire outlook about the state of the world and the global climate by expressing doubts about the future, but he gradually becomes more optimistic by stating how we can bring about change. As individuals, we can make a big impact by changing our diets to more plant-based food but more importantly eating food produced using regenerative farming practices, favouring indigenous and mixed farming methods over industrial ones. The current food system relies heavily on additives, pesticides and government subsidies that damage the environment. 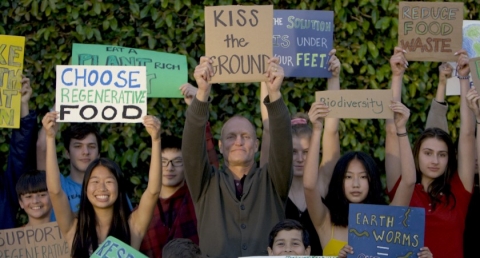 As the documentary progresses, it tracks success stories of reversing desertification. One organic farmer was able to increase his yields without the use of any pesticides or fertilisers and aims to teach people about the process. This provides hope to farmers who believe that growing organically cannot provide a sustainable living for themselves and their families. Environmentalist and Project Drawdown co-founder Paul Hawken makes the claim that regenerative agriculture can be applied anywhere around the world. This can be done through crop diversification, planned livestock grazing and bio-sequestration (the process of capturing and storing carbon in plants).

Here are a few interesting things that I learnt:

I hope you found this review and article useful. 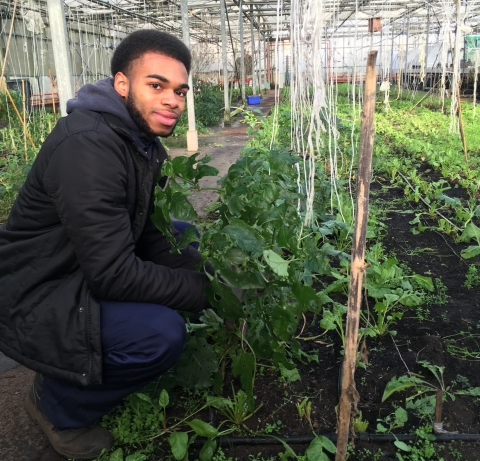 * The EcoTalent programme is funded by Feedback with an award by The National Lottery’s Our Bright Future fund.