Sharing The Land With All Life by Rebecca Hosking

I went to this talk because the idea of ‘Sharing the Land with All Life’ is one that seems entirely necessary to me. I co-own land that we are trying to share, and I’m always up for deconstructing the dominant narrative. It does strike me that we humans find it hard to share, even with each other, however that’s another story. Rebecca Hosking gave a brilliant talk, that I would encourage anyone to watch on YouTube.

Rebecca, who was a wildlife photographer for many years, pointed out that about 70% of UK landmass is farmed – so the wildlife of the UK is very dependent on how we farm.

Her analysis was about our key cultural narratives and how the language we use enables us to take part in a dominating approach to nature. For example, we categorise all our wildlife as weeds, vermin, pests and game – unless we want to eat it. We often see nature as a hindrance, meaning that we marginalise it (literally – think of wildlife margins in crop fields), and we need to be paid for encouraging it (such as through Countryside Stewardship programmes). Nature is the background, but we have other (production) stuff to do. 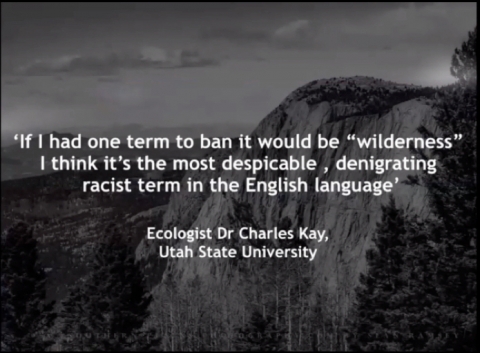 Rebecca encouraged us to think about nature as a person. She outlined conservation, or land sparing, as a way in which we become a ‘visitor to nature’, rather than changing our behaviour so that we see ourselves as part of nature. She rolled through some of the Western philosophers who have taken us to the point of devaluing the natural world, Descartes in particular, and the white colonial explorers who our dominant narrative suggests begin the modern (false) story of ‘pristine wilderness’.

In fact, it’s only been in the past 20 years that it has been recognised that civilisations existed within the so-called pristine wildernesses. As the Europeans advanced into these civilisations, these populations were wiped out by the diseases brought, or they were enslaved. Rebecca acknowledged the benefit of the tracts of wilderness that have been saved by conservation but points out that they have enabled us to create the harmful narrative that we humans are bad for nature wherever we interact with it. She points to the ‘flurry of papers’ in the past five years that have shown us that wherever indigenous populations are stewards of the land, biodiversity is higher than protected parklands, and there has been a call that science must embrace traditional cultures to show us how to do it. This is hopeful!

We need wiggle room to change our culture – this CAN happen! We need to breakdown our uses of words such as ‘nature’, because we almost always use it as an ‘othering’ word. Alternatives that she uses on her farm in Devon, are in the screenshot below. 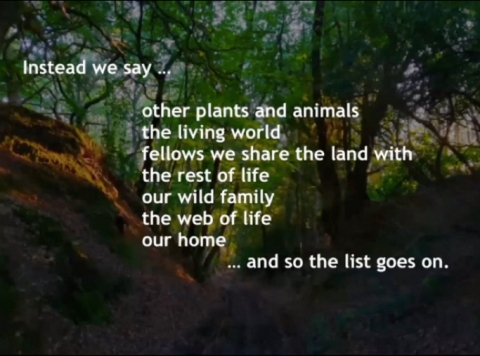 She also bans use of the words ‘weeds, pests, vermin game’ and calls them ‘wild - plants, insects, birds and animals’. Rebecca believes that to get to the point of action on farms, we need to change the language we use in our thoughts and words so that we can think about cohabiting with the wild family on our land. We live in an ever divided world with agri- and bio-tech pushing one way and conservation on the other. In the middle, voices of sanity that say sharing the land with all life is important.

The heroes are our indigenous communities, who can remember how to live within planetary means. Look into charities such as Survival International for more information. The first part of healing is acknowledging there’s a problem: we must stop seeing ourselves as dominant over the rest of life and acknowledge we are part of the ecological fabric. If you don’t see yourself as part of nature, you are standing too far back. Time to jump in.