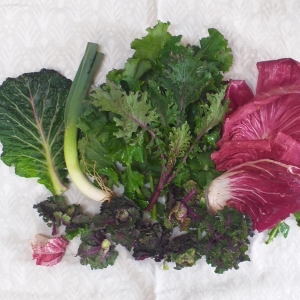 Martin at Ripple Farm puts a lot of planning into the stir-fry pack, which is an innovative way of providing us with fresh leafy greens through the hungry gap when there is not much other local produce available. Martin shares a bit more about what goes into them and how it's a way of practicing "root to shoot" eating - this is the "nose-to-tail approach applied to vegetables, making the most of the entire plant, without being lmited by what we traditionally eat, e.g. sprout tops, carrot tops and turnip tops are now popular greens but used to be discarded, treated as waste or fed to farm animals! Martin's innovative approach to the stir-fry pack reduces food waste on the farm while also helping us to discover how tasty the traditionally overlooked bits of a plant are. 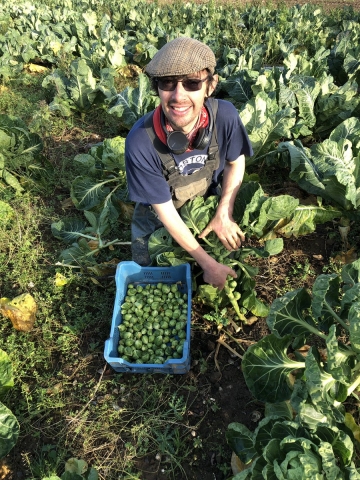 "Spring is definitely stir-fry season at Ripple Farm, it's that time of year when the brassicas want to do what comes naturally, and spread their seeds, but first they flower and those flowering shoots make great stir-fry ingredients. Purple-sprouting broccoli is a well-known flower shoot that we love to eat, but the flowering shoots of the kales are pretty tasty too. It almost seems that despite giving us tasty leaves all season, their raison d'etre is really to give us their delicious flowering shoots for stir frying. The shoots of the sweeter kales 'Hungry Gap' and 'Red Russian' are particularly tasty. And not to be outdone, the stumps of cut-off red cabbage throw up tasty shoots too! It's a bit like nose-to-tail eating in the brassica world! And we like to add an allium or two to our stir-fry mixes too, so expect one or more of the following - a baby leek (this avoids them being left in the field as 'waste'), a few leaves (and sometimes flowers) of wild garlic, a spring onion or a spring garlic.

As well as using the "waste-not" approach to harvesting our crops to make a stir-fry pack, we also grow some crops especially for stir-fry greens.  We grow a lot more flower sprouts now, (their name subsequently changed to 'kalettes'). We grow three varieties of kalettes to spread their season out from November to March, varieties include 'Christmas Rose' and 'Garden Mix'.

We also deliberately plant some late January King cabbage and 'train' them up - by continuously removing the colourful outer leaves - for stir-fry packs before they get old and tough. This also keeps the cabbage plant open, which is ideal for repeat harvests.  And we sow some early spring onions very close together and then thin them for stir-fry use.

We had  a good crop of 'Cavolo Nero' this year (black kale) and were able to include plenty of that in December/January. We also include radicchio, which has been great as a cold-tolerant mid-winter stir-fry ingredient."