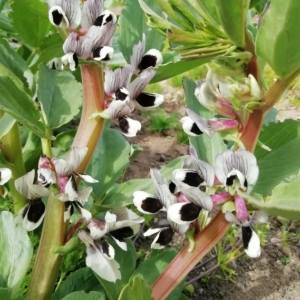 The sun's out at last and the temperature's rising. The farmers who grow your food are grateful for the recent rain on their newly planted crops. After a doddering start, it feels like spring is finally with us.

Some new-season crops are starting to come through. We have UK-grown radishes, lettuces and a bumper crop of Hackney and Dagenham salad this week. There’s rhubarb for many of you this week and asparagus for some, but both these crops are arriving four weeks later than usual!

The sad truth is that much of what we think of as spring produce – new potatoes, bunched carrots, peas and beans – are still a way off being ready to harvest. This is especially true this year after a long, dry and frosty April. Sarah Green recorded just 1mm of precipitation on her Essex farm last month – and that was hail! Now, thankfully, her Twitter feed is full of photos of broad beans in flower – perfect plants but still pod-less.

The "hungry gap" is well and truly at its peak. This is the time dreaded by farmers, greengrocers and vegbox veterans, but unfamiliar to many other citizens who have grown used to the perpetual summer offered by supermarkets. Read the label and you’ll find that those veg we think of as spring veg have been shipped or flown from distant farms in Mexico, Peru, Senegal and Thailand.

But as those wishing to eat seasonally and sustainably know, in reality there's very little British produce available this month. Even the roots have run out: this week’s onions and celeriac are Dutch; the beetroot is from Spain.

Danny at the Better Food Shed is warning that the onions will run out completely before we see the first new-season spring onions and green onions in a few weeks. Jo, who orders the produce for your bags, is working extra hard to keep the bags interesting – adding Spanish beans, fennel and courgettes to tide us over till the local ones are ready to harvest.

What are plentiful at this time of year are leafy greens – Adrian at Wild Country is keeping us well stocked with oriental greens such as tatsoi and pak choi, rocket, spinach and kale.

And it won’t be long before the new season starts to share its local riches. Hang in there for your first taste of crisp local peppers, tender bunched carrots and the first tomatoes, beans and plums.