≡
Farewell Grahame and thanks for all the veg!
Tuesday, 4th January 2022 by Rachel Dring 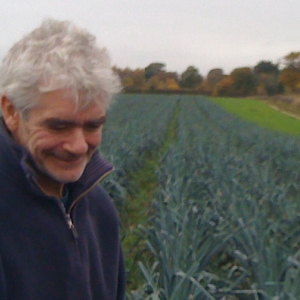 Grahame Hughes has been supplying the GC veg scheme with organic produce from Norfolk for over 20 years. This December marked the end of an era, with Grahame’s decision to retire from farming and close down Hughes Organics – the wholesale business he ran with wife Lizzie and son Josh (in photo, below). With over 40 years of organic growing under his belt he’s seen a lot of change in the industry and made a huge contribution to furthering the cause.

He was a pioneer in the East Anglian farming community, coming in as an outsider and becoming a leader. He taught farmers and students how to grow organically and formed a farmers’ cooperative and a wholesale operation to bring East Anglian organic produce into London. Recently he’s seen the decline of farming in the area and has suffered the severe blows of Brexit and climate change that are threatening the region’s ability to remain highly productive.

We caught up with him to reflect on what he’s loved about his work, and his hopes for the future of farming.

What changes have you seen over the years?

When Grahame started out in 1978 there was very little organic growing in East Anglia – the movement began in the West Country. In 1982 he took on a 70-acre plot. “That was major acreage at that time. Most organic growers were only growing on one acre.” Organic food was also mostly unheard of. “There was no organic market when we started, just the odd wholefood shop. It’s massive now and growing every year.”

In the 1990s, box schemes began to pop up. Grahame started one of his own in Norfolk as well as selling to London schemes.

“My greatest joy has been working with customers. I used to sell to supermarkets, which was all right. But when we started doing boxes around 1994 it was brilliant having the connection to the consumer. Then watching all the London box schemes come up, especially coming back to find a scheme starting up in the area I grew up. That’s when I got a sense of being part of an alternative food system and a very supportive one at that.” 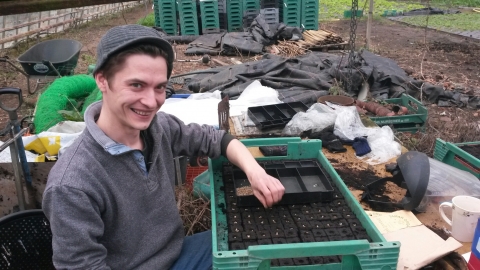 Since Grahame and his family have been farming in Norfolk, they’ve encouraged and inspired more farmers to convert to organic. As the organic growing movement started to take hold in Norfolk, larger farms were established and eventually they formed a cooperative called Eostre Organics. “Organic became more normal.”

Two of the UK’s largest organic growers started up in the area and joined forces with Grahame to get their produce to market. Woodlands was one. They specialised in carrots and for a time produced most of the country’s organic carrots. Brecklands was another. These large organic farms provided London box schemes like ours with a reliable source of field-scale vegetables all year round and were the backbone of Grahame’s wholesale business, which he complemented with his own glasshouse-grown produce. 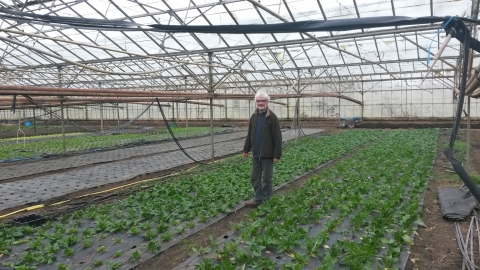 Since 2015 Grahame’s seen a steady decline of organic farms in the region. As a result, he’s been slimming down his wholesaling business.

“The real problems started around the referendum in 2016. Woodlands Farm, a 600-acre organic farm, stopped doing wholesale in 2019 because they couldn’t get the labour once free movement of people became difficult.”

Brecklands recently closed down for similar reasons. “On top of that, we had some years of devastating weather and crop failures. Last year aphids and viruses wiped out 70% of their carrot crop. If it happened again, it would have bankrupted them. When they dropped out, that was half our business gone.”

What are your worries about the future?

He’s seen whole crops wiped out by blight. “Freak weather events are no longer freak, they’re normal, and the effects are devastating.

“In our glasshouses we grow 1200 tomato plants each year. The thermometer hit 49.5 degrees this year and we lost one truss on every plant. It’s hard for plants to survive in that heat. Carrots die when the soil reaches 40 degrees – that happened the year before.”

Well that’s all a bit bleak. Tell us what you have loved about your work.

“It’s immensely satisfying to earn your living in a pleasant, benign atmosphere. Growing is such a lovely thing to do. It’s healthy for body and mind. Farming in an environmental way connects you with other people with good attitudes. It’s not cut-throat; it’s just the way people should behave, with respect.

“Nearly everyone involved in organics is very honest. You won’t get stabbed in the back. We’ve worked with people who’ve come from the conventional side and they’ve been surprised – if they accidentally undercharged a client, the client would point it out and insist on paying the difference. This was a non-exploitative way of doing business. I’m pleased and proud to have been part of that.”

What are your hopes for the future?

“We’ve taken it as far as we can, but it’s for your generation to pick it up and take it forward. There are different needs and energies now. Our concern was chemicals – what they did for the environment and our health. Now the concerns are much broader.

“In an area like ours there’s big swathes of privately owned land. There’s plenty of energy for change in the next generation of farmers, but access to land is so difficult.

“There are two ends that hold it all together: access to land and consumers to sell to. Groups like GC are brilliant; they’re an agent for change. One way things are improving is the emergence of people like Sarah Green being able to expand her farm to feed into London box schemes. Growing interest in people joining your schemes will create opportunities for growers. There’s a groundswell of people wanting a better food system.

“It really needs to translate into government policy, but the government don’t take food production nearly as seriously as they should. Conventional farmers need to be incentivised to grow in nature-friendly ways. Food is far too important to be left to the market. Farming should be treated as a public service.

“Things are so very different now to when we started; that is part of our legacy. Growing Communities didn’t exist 40 years ago and now there’s a whole network of like-minded schemes like yours. People’s attitudes are good, and I believe in people. Every decade is a new beginning and a new opportunity."