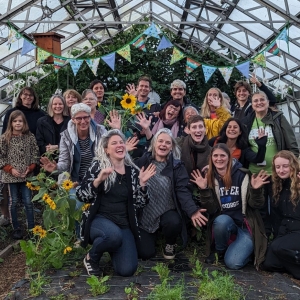 These days Dagenham Farm is a veritable feast of lush vegetation. Birds flit between a network of glasshouses and polytunnels while nasturtiums and self seeders freely ramble along pathways. The wild and the 'weeds' have a place here as much as the tempting rows of seasonal veg.

But it wasn’t always this way. Ten years ago, the farm was a concrete and gravel jungle filled with 1000s of imported potted plants to be used in Barking and Dagenham's parks. But GC looked past the paving and saw the potential in this former council nursery. After securing some lottery funding, head grower Alice (undaunted by all that concrete) set to work with her team and local volunteers! In 2012 we planted our first tomato plant, and just two years later, the farm achieved organic certification. 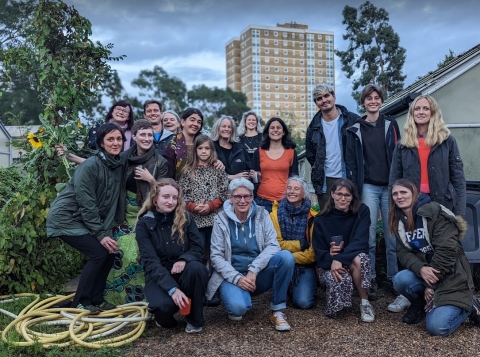 Over the years Alice and Dagenham locals Ashlea and Dave have transformed the space into a productive smallholding, growing many of the leafy greens you enjoy in your veg bags, along with herbs and "exotics" (the name for tomatoes, aubergines and other veg that grow best under glass). The site has also doubled up as a classroom for local school children, it's trained many budding growers and Jamie Oliver even filmed an episode of Jamie's Meat-Free Meals here. Last week we came together to celebrate all this hard work over a tipple and some delicious grub (grown on site of course). Take a look at the photos and see how the farm has evolved over the years below.

The story begins in 2008, when Growing Communities commission Tash to do some research into peri-urban food growing – an idea that had recently emerged and something we were keen to explore.  The result was a great report called “Growing Round the Edges” which set our minds whirring about how GC could make that a financially viable reality.

In 2009 – Sarah from Sustain pointed us in the direction of an abandoned plant nursery in Barking and Dagenham, Kerry jumps at the idea and comes to check it out. By 2012 she has secured a Lease for the farm and a 3 year grant from the Lottery Community Fund to set up an organic farm in the then derelict glasshouses.

Growing Communities recruits a talented head grower to the farm, whose name is Alice Holden,with Beth Stewart recruited as assistant grower. Then the digging of tonnes of concrete from the polytunnels happens, and one of Alice’s first farming tasks is becoming an expert concrete driller… 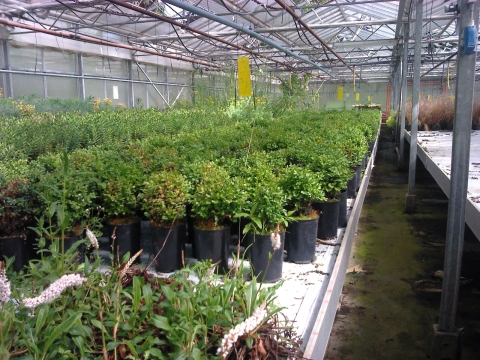 Volunteer turned trainee Paul shared his early memories of the site with us. He remembers "digging three layers of sand and dirt from two of the tunnels and replacing with compost. I remember the rats staring at me from the cavity between the large greenhouse and what became the communal space. It was fun looking for creative ways to reuse material and repair the site... it pulled me out of my comfort zone, helped me realise I was capable of more than I thought I was." 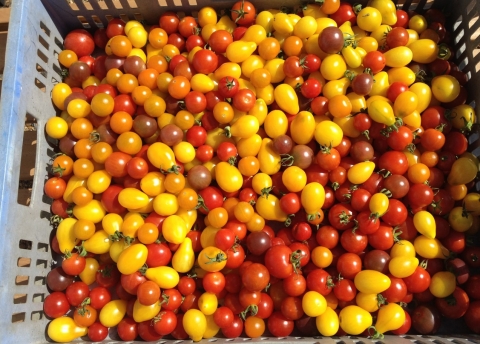 2012 - Finally in Feb 2012... Alice starts sowing the first seeds at Growing Communities Dagenham Farm and by summer we have our first tomato harvest! 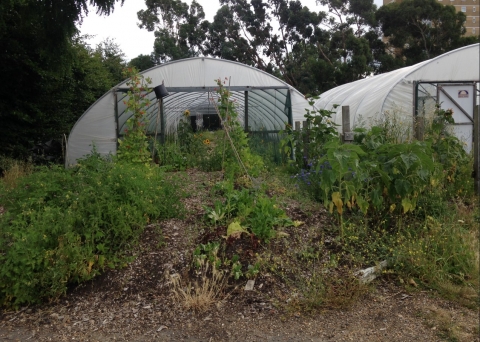 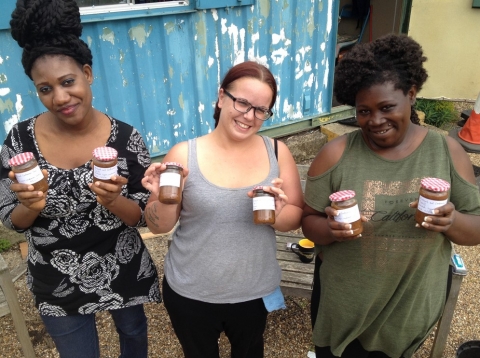 2016 - The Lottery-funded Grown in Dagenham project starts. Here are trainees Glory, Emma and Fiona showing off their Dagenham-grown and made "Dagenjam"! 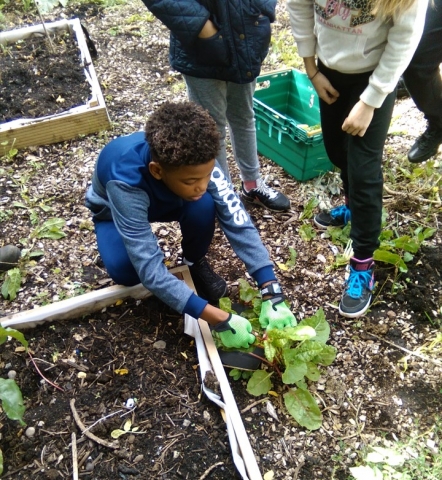 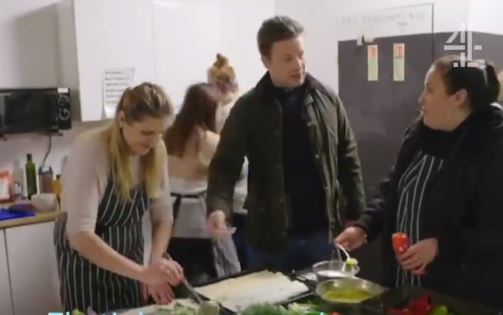 In July 2018 Kerry gets Barking and Dagenham council funding for the Recipe for Life project - Working with young people with mental health issues; plus a pilot cross generational project with school children and older local residents; tree planting for volunteers with mental health issues, and a food project for women on low incomes including women from migrant background. Jamie Oliver films one of sessions for his TV programme - and loves the food! 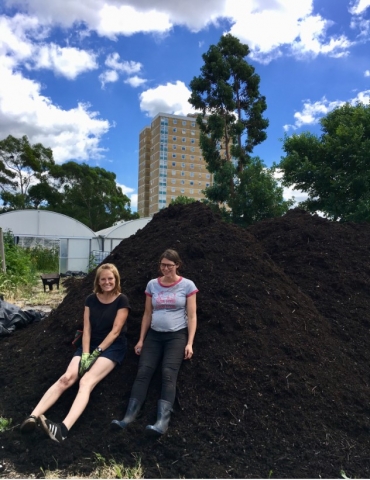 2018 - Enriching the soil is a priority, here growers Ximena and Alice gear up to tackle the compost mountain. 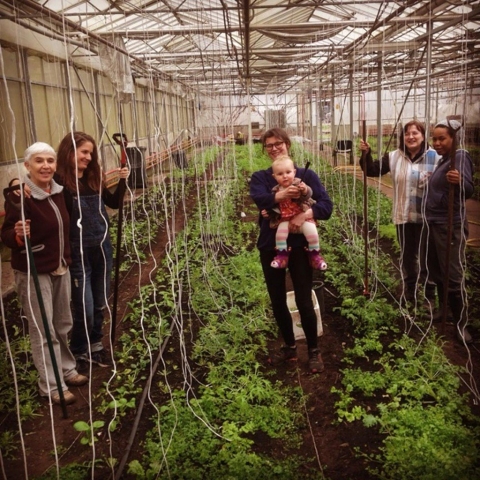 2018 - Alice and her brilliant crew of female growers. 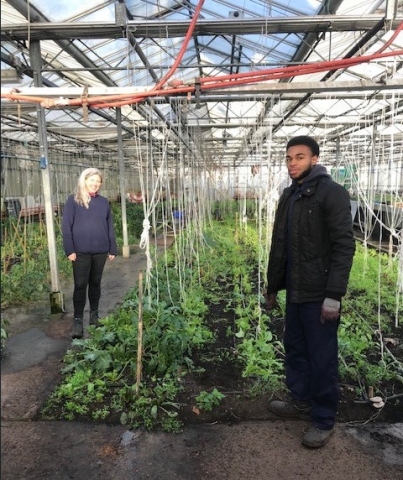 2020-2021 We enter a tricker chapter as national lockdown is announced and we hear that the National Lottery turn down our application for our second Grown in Dagenham project. But the farm continues to run through thick and thin as we all navigate commercial and private uncertainties, furloughs, and a general need for even more daily problem-solving than usual. Alice pivots farm sales from restaurants to the veg scheme and we become a host organisation for several cohorts of Kickstart trainees – welcoming young people to come and train on the farm. Pictured are GC manager Katy and trainee Marlon when social distancing was in full force. 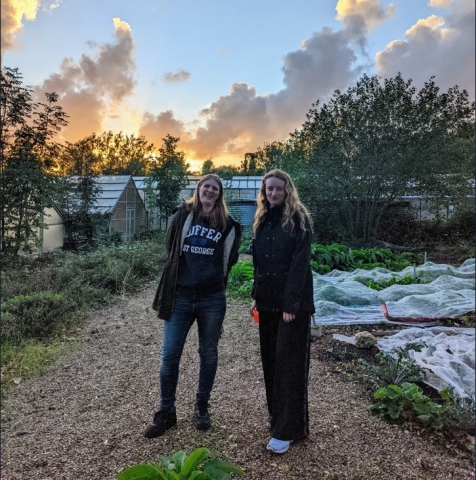 2022 - Your growers Ashlea and Amber in the transitional period as summer crops come to an end and winter crops are tucked up.

We've won awards, been on tv, hosted government delegations, helped inform the government’s Environmental Land Management overhaul – we're nationally (even globally) respected. We’ve had bustling years and we’ve had quieter years, but through it all Alice and the growing teams have filled tens of thousands of organic dinner plates from this place - a remarkable oasis among miles of concrete.