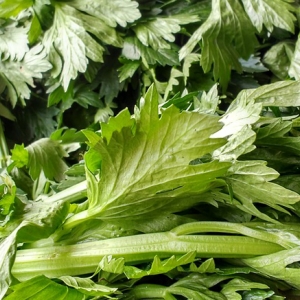 Traditional varieties of celery tend to have more leaf than stalk and a much stronger flavour that works well in pesto and soup. They may not be quite so good for scooping up dips but they add an excellent depth of flavour to many recipes, as well as being packed with antioxidants.

Chop and mix with sliced apple, toasted hazelnuts or walnuts and a dressing with a base of mayonnaise, yoghurt or blue cheese for a colourful and punchy version of a Waldorf salad.

Add cooked puy lentils, bulgar wheat or quinoa to this for a more substantial feast.

Use celery in place of parsley (a close relative of celery) in a tabbouleh, such as this recipe.

Tradionally made with a mixture of salt and celery seeds, this version of the versatile seasoning uses dried and crumbled leaves. (You could also dry your leaves in a traditional oven on a low heat until crisp but not frazzled.)

Find a load more tasty recipe suggestions in this blog post from our neighbours at OrganicLea.