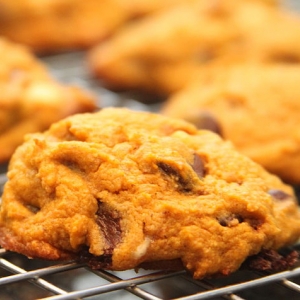 Veg scheme member Lisa sent us this fab pumpkin cookie recipe and says it works really well with delicata squash, red kuri or pumpkin from the bags. Check out this recipe and others on the eatwise blog.

1 heaped cup pumpkin or squash, peeled and cut into cubes

Half cup chopped dates or sultanas

Heat the oven to 180C and grease or line a baking tray with baking paper.

Steam the pumpkin or squash for around 15 minutes on the hob until soft. Put aside for 10 mins to cool.

In a separate bowl, blend together the steamed pumpkin, coconut oil, egg and honey for a few seconds until smooth. Add the pumpkin mixture to the flours, combine, then stir in the dates.

Place spoonfuls of the cookie mixture onto the baking tray, flattening down with the back of the spoon, and bake for 20 minutes until they're crisp and golden brown on top. Leave the cookies on the tray to set for 15 minutes before you serve them.