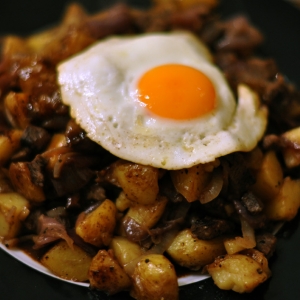 This Swedish recipe, which literally means "bits in a pan", comes from veg scheme member Anja Nyberg, who says: "I really like this recipe for using up different kinds of root veg from the bags and, though the long frying time means hanging around the kitchen for a while, it only needs an occasional stir, so you can catch up on emails or keep an eye on the kids at the same time.

"Traditional pyttipanna also includes bits of sausage/bacon/ham, which are fried separately and chucked in at the end - these could be substituted with chickpeas/veggie sausage/quorn pieces."

Or you could use vegetable oil and leave out the egg for a vegan version.

Melt a good size knob of butter in a heavy-based frying pan and fry all the veg on medium-high heat, stirring every now and then. If it starts burning or catching, turn down the heat slightly, or boil the kettle and pour in a little bit of water. Adding water will shorten the frying time (at least 45 mins dry) but also make things a bit mushier. Adding another small knob of butter towards the end also works.

Chop the onion and add it to the frying pan after about 20 mins, as it cooks faster than the roots. Season with salt and freshly ground black pepper.

Serve with a fried egg on top, and some picked beetroot, sauerkraut or kimchi on the side.