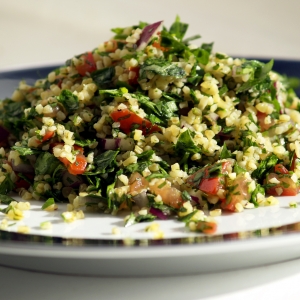 Yotam Ottolenghi says tabbouleh is all about the parsley - think of it as a parsley salad with grains in it - not the other way round.  This is a no-frills version, though some people like to add a pinch of spices, such as cinnamon, cloves, nutmeg or ginger. Up to you.

Ingredients
50g bulgur wheat (or use quinoa for a gluten-free version)
1 large bunch flat-leaf parsley (70-150g), chopped (it's fine to include a few stalks too)
50g mint, chopped
2 medium tomatoes, diced
2 small (or one large) cucumbers, diced
3 spring onions, finely sliced
juice of 1 lemon
3 tbsp olive oil
salt and pepper to taste (and other spices, if you like)

Method
Rinse the bulgur wheat in a sieve until the water runs clear. Drain and tip into a bowl. Pour over 200ml boiling water, cover tightly and leave to soak for 20-30 mins.

Put the chopped herbs in a large bowl and add the tomato, cucumber and spring onion.

Drain the bulgur and add to the bowl, along with lemon juice and olive oil. Mix thoroughly, season to taste and serve.