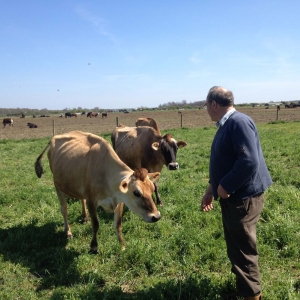 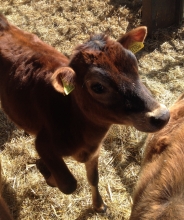 Matthew Unwin sells organic meat at Growing Communities’ farmers’ market every Saturday. Since the addition of his micro-dairy in 2013 he also sells raw Jersey milk and kefir. I visited Longwood Farm in April 2015 to see Matthew and his wife Louise and find out how their raw milk micro-dairy was going. Here's what I saw and learned on that day. The current threat of Avian flu means that the chickens have had to be kept in the barn for the past few months and haven't been free to roam as they were on my visit.

Warm sun on my back and a lovely smell of fresh straw; I’m staring into a pair of deep brown, long-lashed eyes and a slightly raspy tongue is licking my fingers… No – not another sad Poldark fantasy but my encounter with a young Jersey calf at Matthew Unwin’s organic farm in Suffolk.

We know that some box scheme members and customers at the market are vegetarian or vegan and we respect this, but Growing Communities’ current model of sustainable farming includes meat and dairy from small-scale organic production as part of a mainly plant-based diet. We want to show more people the difference between Matthew’s farm and conventional or even larger organic livestock and dairy farms. I also believe that if we’re going to drink milk or eat meat as part of our diet then we need to know more about how those animals live and how they die.

After my chat with the Jersey calves, Matthew and I walk to the woods down a lane from his farmyard. In among the trees and the undergrowth I can see sheep and new lambs butting their mothers and running away as we approach. Matthew’s sheep give birth to their lambs in the wood – it is near enough to the farm for Matthew to keep a close eye out for any problems. Matthew’s Welsh sheep (that’s a breed rather than a nationality) are a traditional mountain breed – and he points out that the “lamb” he sells at the market is technically hoggart, as the animals are all well over a year old when they are sent to the abattoir. Most lamb in supermarkets is 3-5 months old when killed. 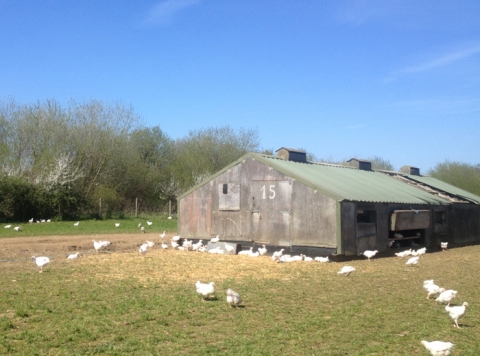 As well as rearing Welsh sheep and Belted Galloway cattle (both rare breeds), Matthew and Louise also keep chickens. Out in the field nearest their house, Louise and I crouch in the grass like David Bellamy wannabes watching the chickens do chicken things – scratching for worms, dust-bathing and sun-bathing – outside their hen house. Longwood’s small movable hen houses have an open flap all down one side so that the chickens can get out easily into the field and nearby hedgerow whenever they want during the day. This contrasts with the lives of most chickens reared for meat in the UK where birds spend their whole lives in crowed sheds holding 25,000 or more birds at a time. 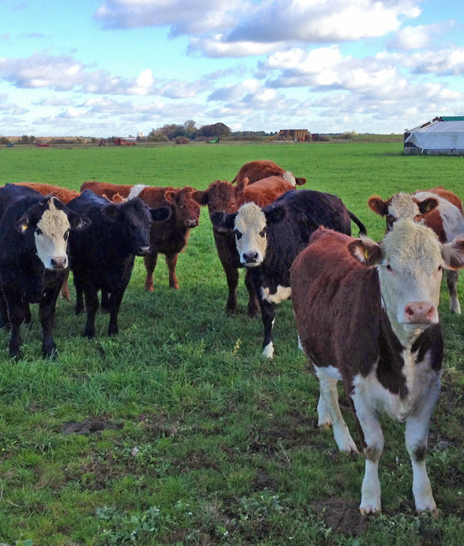 Matthew and Louise’s micro-dairy has just five Jersey cows that they bought from a conventional dairy farm. They’ve decided to produce raw (or unpasteurised) milk, because they are convinced of the health benefits – for both consumers and cows – of raw milk production. The new calves I met are going to join this small herd and will start to be milked in 18 months. So at the moment Matthew is milking five cows twice a day – the average UK dairy herd is 131 animals. Pressures to keep the price of conventional milk down is driving smaller farms out of business and increasing the size of dairy herds. The number of dairy herds in the UK fell by 43% in the ten years between 2002 and 2012, while annual UK production of milk has stayed pretty much the same – so fewer cows are producing more milk. This intensification is encouraging more and more conventional dairy farmers to keep their herds inside all year round where the costs of feeding are kept down and the milk yields are increased.

The reason Matthew and Louse felt able to take on the risk of starting a small herd because they knew they’d have a good outlet for it at the market – we already have organic raw milk from Hook & Sons – so the demand is there. They also make kefir from the milk produced earlier in the week, as only the freshest milk is taken to market on Saturday. Kefir is a fermented milk product full of beneficial probiotic bacteria with a slightly fizzy, acidic taste. 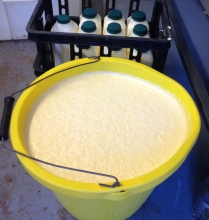 Before I go to get my train back to London, Matthew shows me the cold store where there are buckets and buckets full of yellow Jersey cream – and bottles of kefir ready for market. Matthew’s off to do the milking, then work on building the new milk processing area, before doing the rounds of checking on animals, mending tractors and endless paperwork – and there’s not a scythe or a heaving bosom in sight.