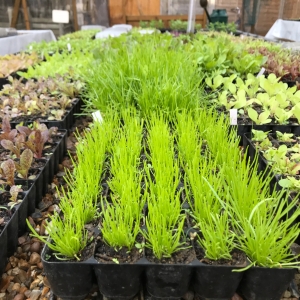 Come to our plant sale in Springfield Park on Sunday 1 May. More info here.

After the dormant period for our crops, and to a certain extent, for the growers, too, over December and January our volunteers returned to the sites in February.  At both the Springfield and Clissold Park sites we have 'dead hedges', areas where we stack woody prunings that won't decompose in the compost. This allows the prunings to decompose slowly, gives us a wind buffer at Clissold and is a source of nesting materials for birds as well as providing a habitat for various creatures (hedgehogs were seen in the one at Springfield last summer), although often those we are not trying to attract such as foxes, rats and wasps!  The dead hedge at Clissold was falling down so Mat and Dewi spent 2 afternoons resurrecting it and putting new braces in place to keep it in place - it's looking great now! 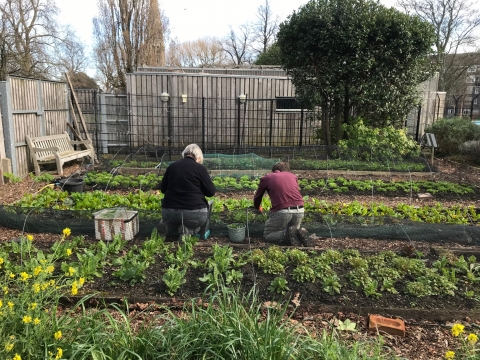 Otherwise we have been busy harvesting and sowing seeds and pruning and mulching.  The hot spell 2 weeks ago meant that we even watered the outside beds, whereas this week I'm hoping that the mesh on the brassica and endives will be keeping the worst of the cold off them.  The beautiful buttercup-like lesser celandine made its appearance on our sites last year.  Even though it is good for the pollinators it spreads really rapidly so we have been weeding it out so that we don't have a bigger problem further down the line. Instead have left our brassicas to flower, as well as ivy and 3 cornered leeks which have been flowering in the autumn and the last month or so, providing a food source for insects when there is not much else around.