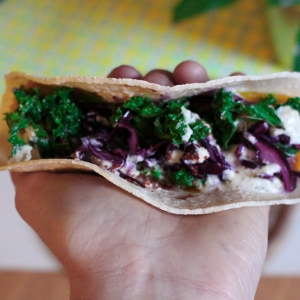 This recipe was created by Lola DeMille, a GC member and chef. She shares her thoughtful, veg-led recipes with us using her veg bag ingredients. Follow her on instagram or find out more about her work on her website

A great recipe for a Veganuary gathering. Guacamole is traditional of course, but with clever uses of more sustainable vegetables, it wont be missed! There’s a fair few elements to this feast but everything is very simple and can be done in advance or to use / create leftovers. I buy corn tortillas from the Cool Chile Co as they contain no nasties but I've included a recipe at the bottom as they are worth making fresh – they have a lovely toasty flavour.

1 can of black/kidney beans, drained and rinsed

Slice or chop the onion(s) and fry briefly in oil before adding the beans and spices, roughly mash until you get a chunky puree, and add the chopped coriander

Roughly chop the squash and place in a small pan, just covering with water, add the stock power and simmer until soft, about 10 minutes. Pour off and reserve some of the stock, blitz the squash with a hand blender or mixer adding liquid as needed until a mash potato consistency. Season if needed

Alternatively use the cream cheese made by Tofutti, it’s delicious.

Pinch of dried mint or thyme (if you have it)

Soak the nuts in enough boiling water to cover for 10 minutes. Then drain, add all other ingredients and blend – I’d say about 100ml of plant based milk (go less to begin with adding more until blends well and is pourable – this will depend of your cashews)

Any brassicas will work for this – I went for about a half head of a small red cabbage, a few leaves of kale, brussels sprouts, radishes etc – whatever you fancy. You don’t need a lot for the taco’s but it’s a nice salad on the side as well – but this might depend if you have a slicer attachment on a food processor or if it’s being cut by hand!

Place the sliced veggies in a big bowl and sprinkle sea salt and drizzle 1 tbsp apple cider vinegar or juice of a lemon. Shrunch the mix in your hands (it can take it!) until it softens and the cabbage picks up the vinegar dressing. It’s meant to be quite tart to balance the sweet creaminess of the squash.

Mix the flour and water until you get a dough. Roll into ping pong sized balls, place between the parchement or sandwich bag and press until you get 2/3mm thickness

Heat the tortillas in a dry pan for a few seconds each side and cover until ready. Assemble the tacos with the squash puree, beans, kale slaw and drizzle the cashew sour cream, eat and repeat!