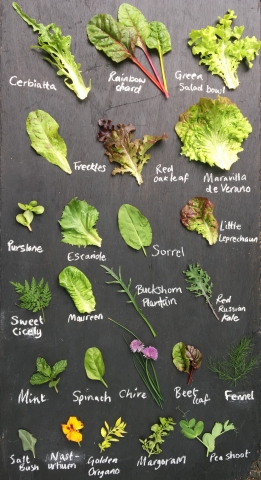 Four small market gardens make up the Patchwork Farm in Hackney where we grow salad and train new growers. You are welcome to visit our larger sites when we are working there or join our volunteer work team. Opening times vary with the seasons, so check the volunteering page for updates.

Our Springfield Park site (below) is located in Springfield Park, Clapton E5 9EF. We work at Springfield on Mondays. In addition to its raised beds, Springfield also has a polytunnel which grows a variety of different salad crops in winter and then turns over to heat loving crops such as tomatoes, cucumbers, beans and basil. 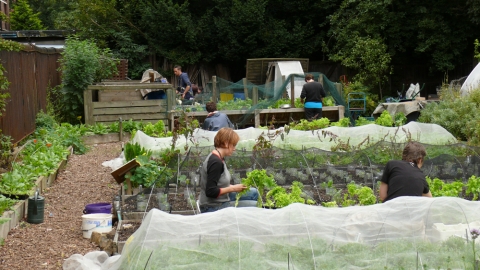 Our Clissold Park site (below) is located in Clissold Park, Stoke Newington, N16 9HJ. Our site is open to the public when we are working there on Tuesdays. This site also boasts a polytunnel and in addition to tomatoes, cucumbers and beans, also specialises in melon growing! 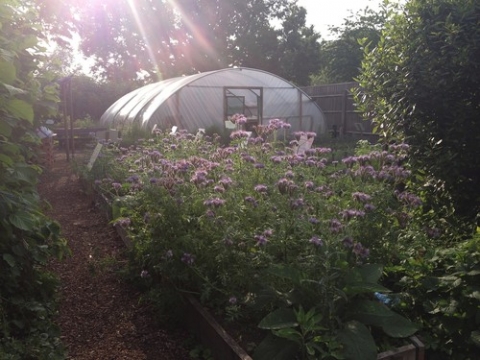 Our Allens Gardens site is on the corner of Manor Road and Bethune Road, N16 5BD. There is a self-guided tour to allow you to find out more about what we are doing while allowing the growers, trainees and volunteer team to carry on working. As well as the growing space, our Allens site boasts an eco classroom, which features a fully operational compost toilet and a living sedum roof. The building is available for hire.

The last plot in our Patchwork Farm is Stellman Close near Hackney Downs. Here, graduates from our Urban Growing Training Scheme grow salad to sell to our weekly veg box scheme and other local outlets. This has increased the amount of locally and sustainably grown food in Hackney and helped growers generate an income from food production.

Our trainee Amber is working with us as part of the Government's Kickstart programme. She will spend six months learning and experiencing the entire growing cycle from soil to seed to harvest to compost to soil again, via watering, weeding, worms and much more. 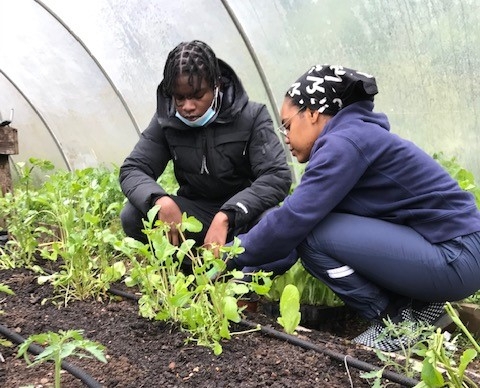 Earlier in 2021, we employed three local young people as paid interns as part of Feedback's Ecotalent programme, aiming to help young people from underrepresented backgrounds to learn skills that will equip them for jobs in the food and environment sectors. Marlon, Warami and Larissa each stayed with us for four months, learning with our growers on the farms in Hackney and Dagenham, and also picking up other skills related to growing and producing food, including spending time with the Better Food Traders, the marketing team, on the veg pack and in the office. 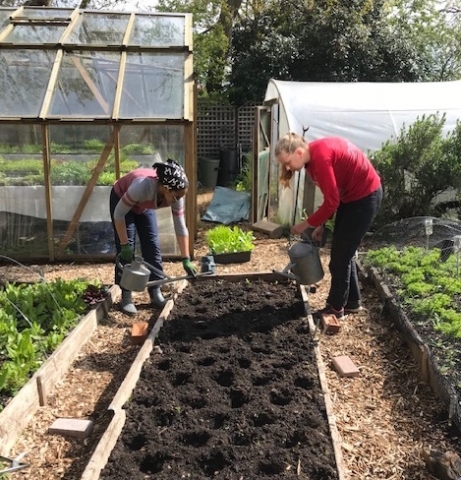 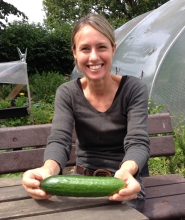 During the growing season - March to September - we have produce for sale at our Clissold Park site on Tuesdays: the leaves and fruit are picked that day so are the freshest money can buy. Depending on season, we offer Hackney salad leaves, herbs, tomatoes, cucumbers, beans and melons.

History of our market gardens

Growing Communities started off with a demonstration growing plot in Clissold Park in 1997.  After the park's refurbishment in 2010, we inherited the old butterfly tunnel, which we reskinned and turned into a productive polytunnel.

Our Springfield Park market garden opened in 2001 on the site of a yard formerly used by the park rangers. The polytunnel was constructed the same year. We used the Springfield greenhouses for veg production until they were declared unsafe in 2009.

We took over our site in Allens Gardens on Bethune Road, Stoke Newington in 2004. It replaced a previous site, further up Bethune Road, which we had to leave when the land was sold on for housing.  We moved the entire site, which included most of the raised beds, the fruit trees, herbs and over seven tonnes of lovingly cultivated organic topsoil 400 metres down the road to Allens Gardens. The site had previously been home to burnt-out litter bins and a derelict container but is now a thriving learning garden - where - now you'll find raised beds full of salad leaves, organic fruit trees lining one wall, a pond, wildlife area, a greenhouse, a shed and our eco building. 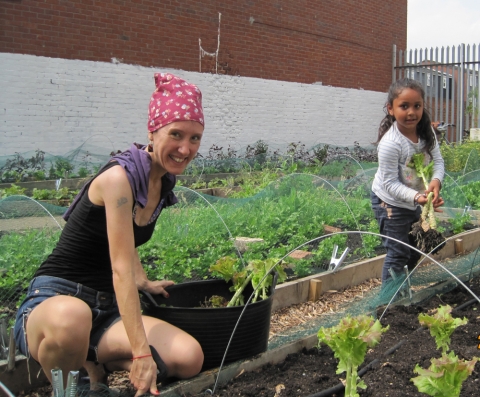 The first "micro-site" was set up in October 2008 in the vicarage garden of St Paul’s West Hackney (now closed). Several more sites were set up as part of a development project funded by the Local Food Fund that ran from 2012 to 2014. All were set up on previously underused spaces on estates, private gardens and church land across Hackney.